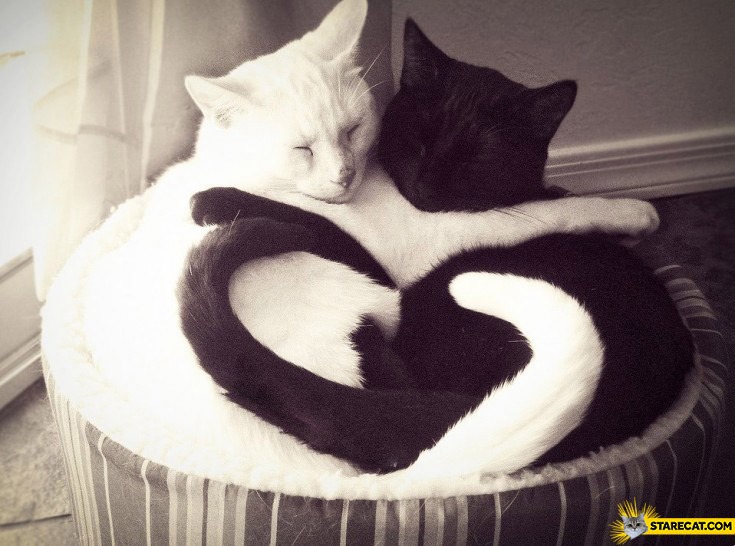 For a long time I thought that the idea of soulmates was primarily a romantic notion: what the prince is for Cinderella – a relief from a sad past…or Baucis for her Philemon…who were granted the grace of dying together due to their deep love for one another…or Romeo and Juliette – who found each other against all odds…and different from Shakespeare…should please be staying together alive!

In any case a rather blissful togetherness in this life and others, with trilling birds and caroling angels or vice versa and lots of sunshine of course…or something like that.

Since we are humans and from our perspective no fictional characters and therefore move in the more human daily life and less in the romantic realms…it is on this level nothing but an illusory concept.

That also applies to convoluted ideas about at one time united souls who had to suddenly and dramatically  “split-up” and put an end to their eternal bliss and now, are lonely, lost and confused and condemned to roam through the realms of the multiverse and infinite times driven by an eternal yearning to find each other … That is simply esoteric kitsch.

But it does exist

But that does not take care of the matter. For many people speak not only about their ideal partner as their soulmate but also about their real partner. For them their partner is their dream partner and their partnership/marriage has the qualities which many singles are so deeply craving: mental, emotional, spiritual and physical compatibility and harmony, matching value systems and ideas of living life, self-responsible but also caring behavior, inspired monogamy, good sex, financial ease, trust, reliability, safety and stability etc. etc. – and of course always delight in the existence of the other and the maintenance of the relationship.

Often a soulpartnership is also ascribed certain magical qualities that are not necessarily there from the beginning – but can be developed, like the feeling of ‘being at home’ while gazing into the eyes of the partner or occasional telepathic communication or one finally realizes that there is indeed a healthy path between independence and co-dependence – a healthy interdependence.

The good thing about this notion is that it describes the quality of a relationship which does not depend on certain human beings, but emerges and can be created in their conscious togetherness. That makes multiple soul-partnerships in one life possible including love-relationships and any partnership can always be turned into a soul-partnership – if both parties so desire.

Therefore there is an emphasis in many discussions on soulmates that it is not enough to feel or develop an amazing attraction to the partner…but that a capability for sharing life, a willingness to work on the relationship and a readiness to grow along with it are indispensable to develop those mentioned magical qualities.

This does not only apply to romantic love relationships

From the perspective of higher wisdom and in spirituality a so-called soulmate-relationship has further features that are not restricted to romantic partnerships. According to the spirit world a soulmate-relationship describes foremost the quality of the connection of two people  who intend to pursue a certain task together. To that aim it is sometimes wise not to incarnate as lovers, but as siblings, parent and child or friends, or business partners… Spectacular representatives of this kind of soulmate relationship are for example Winston Churchill and Adolf Hitler. Part of their common soul plan was to play an important part in the history of the world and consciousness.

These encounters and relationships are pre-determined and if one of the concerned avoids these pre-birth agreements they can develop a sickness of the soul. Especially when their relationship is connected to a higher frequency and can and is meant to have an effect on others and are under the special protection of and supported by the metaphysical realms.

Among the soulmate relationships is a special form called twinflame-relationship. These relationships occur among people who emerged from the same soulgroup incarnating into our dual universe, but are one in their origin. In order to experience certain things that can only be experienced apart from one another, they incarnate as single, seemingly separated beings. A twinflame encounter is not necessarily on the agenda for every life. For it can be part of the soulplan to not incarnate together or meet each other so separation from the other can be experienced.

However if two members of the same soulgroup do meet – the number of members varies between two and nine – they usually recognize each other by an inexplicable familiarity. It is also possible to meet more than one of them during one´s life and not always romantic relationships need to ensue. However, the exchange is usually rather intense.

As a general rule it can be said that if a person desires a soulmate or even meeting his twinflame then this is also part of his current life’s program, for otherwise the desire wouldn´t exist. Such a meeting requires a certain maturity and therefore encounters before the age of forty are rather rare and always possible in later life.

But not always they succeed in healing each other together and the relationship falls apart. It has to be said that you are not less or less complete without your twinflame – however with him/her you can have experiences of union that are not possible in this way with others.

Unconditional love is a prerequisite

Prerequisite for the so frequently desired encounter with a soulmate, especially a twinflame is the unconditional love for oneself. For our relationship with ourselves creates the resonance field for our potential partner and if we really want someone who loves us unconditionally, we must love ourselves unconditionally. And together then the aim is to express that love for oneself and for the other in an increasingly higher measure as reunion and fusion can now be experienced in their highest form, after the experience of separation.

From an even higher spiritual perspective all this is yet only another echelon on the path to the ultimate experience of oneness. For in truth everything is one and there is only one consciousness and nothing outside of it: any separation is illusion.

So far most of us are still quite far away from this experience of consciousness, the conscious living of this knowing. However, ultimately we´re all striving for it – and the yearning for a soulmate relationship or even an encounter with a twinflame is only an expression of the yearning of the soul to experience this ultimate truth on all levels of our being.

Wanting and experiencing this in life requires a certain maturity of the soul – for initially a twinflame relationship can be far more laden with conflict and more difficult than a good soulmate relationship. Often these encounters come at a total surprise and result in a complete reorganization of one´s life so far – sometimes other partners need to be abandoned, jobs and countries changed…and other people become alienated…

You really need to want it

Suddenly nothing is more important in the life of these two people than their relationship. This can be tiresome, but also inspiring: they show the way to a higher love, a more united being – not co-dependency, but real harmony. For if two souls love each other unconditionally and manage to overcome all fears of melting together into the higher and whole, they can get in touch with their divinity within themselves and together experience unconditional love and oneness beyond any previous idea. It is possible to get further together in this than on one´s own. If more couples were actually to have this experience of oneness together – the more peace we would have on earth.

To maintain a love partnership with a member of one´s soul family evidently requires serious courage. One really has to want it, be willing and sometimes do something for it – it depends on the individual what that might be in detail – but it definitely is accompanied by the loss of pet convictions, sometimes great changes in one´s lifestyle and massive growth in consciousness. For here too the increase of unconditional love for the other, oneself and life is path and destination. If you really want this with your heart´s desire, you will eventually experience it – for your own wellbeing and that of all of creation – for we are one!

Previous
Why is god single?
Next
Money And Balance