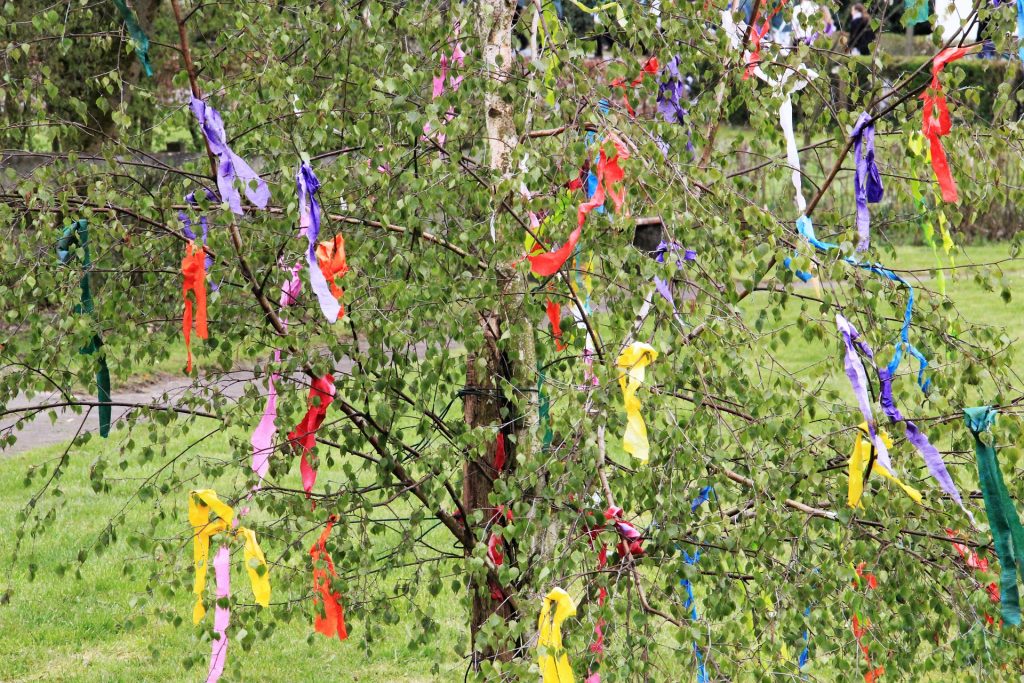 The invisible magic of tradition

I was in Bonn, Germany this year at the end of April/beginning of May and was woken by a strange noise one night. Curious, I sneaked to the window and watched how a group of young man was erecting a “Maibaum” (may tree) by the house next door, complete with colored ribbons from crepepaper and a red heart on which it said the name of the neighbor’s daughter.

In the Rhineland it´s been a longstanding tradition, that young unmarried men honor the unmarried queen of their hearts in the night of the 1st of May by setting up a decorated birch tree by her house. In earlier times it was a way to make a love union public and often also expressed the intent of the young man to make the tree recipient his bride. But in the times of emancipation that has become meaningless. Today it´s a charming proof of love for which a group of men – usually coming from the same bachelor club – help each other out celebrating their loves.

Traditionally the tree remains by the house until the 1st of June. Then the same crew that set it up comes to take it away again. If the thus honored maiden likes the tree giver she might serve him homemade cake and his helpers some beer. Sometimes the girl also gives him a kiss, and he gets a cake from her mother and a crate of beer from her father. Before the tree is taken away she can saw herself a slice of the trunk of the tree to keep as a souvenir. In a leap year it´s often the other way round and the girls set up trees for their beloveds and sometimes even married men for their wives!

In some areas of the Rhineland there is also “May royalty”: a bachelor club holds an auction and he who is willing to pay the highest amount of “May dollars” for the girl he loves is then king of May and his girl the Queen.

Also those May pole trees that are often decorated with a wreath in the crown of the tree and are erected in the village green are a central element of the may celebrations. Often they are also decorated with long colored ribbons which are held by dancers dancing around the tree thereby weaving intricate patterns and undoing them again.

The night of April 30th was considered holy in pre-Christian North and central Europe. During that night the “veil to the other world” was particularly thin and it was easy to get in touch with the invisible world. But also caution was advisable…for as a mortal it could be dangerous to be struck by the magic permeating the atmosphere. Traditionally the 30th of April is also known as the “Dance night of the witches” when besides witches, spirits and demons were also on the rampage. Surely this was so long before the day became the Saint day of a 7th century British abbess by the name of Walpurgis.

The 1st of May was also a holy day for the ancient Celts. They celebrated Beltane and the beginning of summer. They were great fans of the cycles in nature and also celebrated the 1st of November (Samhain), the 1st of February (Imbolc) and the 1st of August (Lughnasadh) with seasonally according festivals. To this day Beltane is celebrated in many areas with Celtic influence, i.e. in England by the election of a Queen of May and dances around the May pole.

But to most people the origin of the rituals is not really important. They simply follow the local beaten paths of tradition, just as in the season of carnival or advent. These beaten paths obviously survived despite the Christian “road straightening” – away from the “circus of gods” to the belief in one (true) god – and found their place in local customs. And not only that: they are increasingly popular.

This increase in attraction of May day celebrations in times of “serial monogamy” and “dating apps” derives in my opinion from a real yearning for a healthy interaction of man and woman and the conscious/unconscious need for experiencing a transcendental dimension of love (and partnership).

From a mythological viewpoint it is far more than a harmless youth custom: psycho-energetically all the celebrators of May are connected to those who walked the path before them. And it is secondary whether this path runs through space – like the hiking trail of the pilgrims of Santiago de Compostella or through time, as the love dance of those who dance around the May tree in one way or another. In Northern and Germanic mythology the birch tree is the holy tree of the love and fertility goddess Freya. So all who are participating in a ritual involving a birch tree are also celebrating the Northern love goddess in a certain way and thereby particularly the love that is the premise for creation herself. That´s magic.

Elisabeth
05.05.2015
Previous
More brain power through balance
Next
Knights of the 21st century